2YO passes Gosford test in a breeze 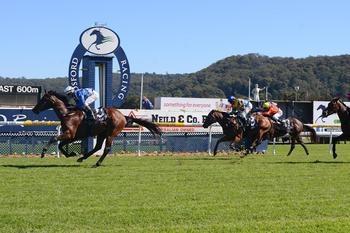 A huge finish landed Test The Breeze a deserved debut win when the youngster claimed the Neild & Co. Maiden Plate (1100m) at Gosford.

The two-year-old trialled well in two separate preparations in the spring of 2012 and before his latest campaign but the juvenile showed improvement at his first race.

Mitchell Bell partnered Test The Breeze at Gosford but a combination of a smart early speed and a wide gate left the pair well back in the field for the first 600 metres.

Test The Breeze raced wide throughout the $22,000 contest but the gelding responded when Bell asked him to work into the race from the 400 metres.

Bell waited for Test The Breeze to get balanced early in the straight before asking for his finishing effort.

The inexperienced galloper responded brilliantly, storming home over the top of his opposition before racing away over the final 50 metres to win by 2-1/4lengths.

Test The Breeze failed to reach his $45,000 reserve at the 2012 Gold Coast Magic Millions Yearling Sale but the promising type looks certain to win at least that amount on the track, starting with his $12,250 winner’s cheque at his first outing.