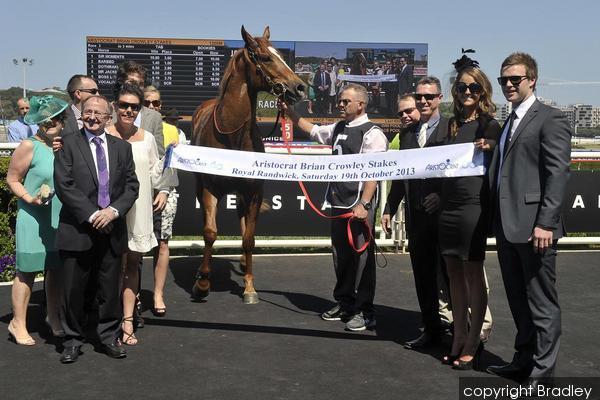 The Ron Quinton-trained Boss Lane looks a sprinter on the rise after a tough performance to win the $100,000 Listed Aristocrat Brian Crowley Stakes (1200m) at Randwick on Saturday.

Boss Lane showed ability at his first campaign when scoring by five lengths at Canterbury before spelling then was readied for his return with a Randwick barrier trial win.

Ridden by Sam Clipperton, Boss Lane jumped well from the barrier and camped outside Dothraki (Ford) in the run with the well fancied Barbed settling last in the run after stumbling badly out of the gates.

With the favourite seemingly out action, Clipperton stalked the lead with Boss Lane until well into the straight before Clipperton asked him for his best after the field had topped the rise. Barbed loomed large down the outside but faded with the early misshap cost him late and Boss Lane did enough to get to the lead and win in close finish.

The official margin was a short half head to Mr Jackman (Huet) who came with Barbed, with a neck to Dothraki in third. Barbed was only a half-length away in fourth. The overall time was 1.10.71 with the last 600m run in 35.10.

“He is a nice horse, this horse,” Quinton said. “He won by a space at Canterbury and they have the Dubawi’s down as wet trackers but we didn’t think today would be a problem.

“I had a bit of a line through Barbed with this bloke, I had a horse that ran second to Barbed at Canterbury and I don’t think there is much between them, so we came in confident.

“Brilliantly ridden, I must add. He waited and waited. I told him it was a long straight at Randwick so just wait because if you don’t wait you don’t win.

“He’s got great scope. I might not do much more with him this time in and I think he will come back a nice sprinter in the autumn.”