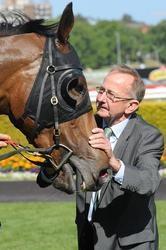 Crafty Irna has defied bad luck and a pair of swarming chasers to claim her second stakes success in the Listed Tattersall’s Club Cup (2400m) at Randwick.

The daughter of Starcraft won the Group 3 Adrian Knox Stakes (2000m) at Randwick as a three-year-old before competing in the better staying races in Sydney, including the past two editions of the Group 1 Metropolitan (2400m).

Crafty Irna finished eighth to Glencadam Gold in the on-pace dominated 2012 Metropolitan on October 6 but a quicker beginning allowed jockey Sam Clipperton to push forward early in the race.

However, luck deserted Clipperton and Crafty Irna when the pair was caught wide early, forcing the mare to press on to settle second after working early.

Crafty Irna travelled kindly for Clipperton once she found a position before the apprentice sent his mount forward to pressure the front-runner rounding the home turn.

The five-year-old moved clear of her rivals descending the Randwick rise before Crafty Irna’s early work began to tell on her in the final 100 metres.

The Verminator and Western Symbol closed late but Crafty Irna held on to claim her fourth win from 25 starts.

Quinton thanked Crafty Irna’s owners for giving Clipperton the opportunity to resume his association with the game mare, which had previously reaped second placings in Listed and Group 3 company.

"She’s had a great prep. It’s a credit to Crafty (Irna) and I’m just so pumped for Sam,” Quinton said."He’s only a kid. The owners were so supportive of me putting him on it and he’s delivered.

"I told him before the race that we’re drawn wide and he’s going to need a lot of luck.”

Crafty Irna’s latest success took her prizemoney tally to more than $410,000, which is more than triple her $125,000 purchase price as a yearling.