Daisy shows she certainly can at Kembla 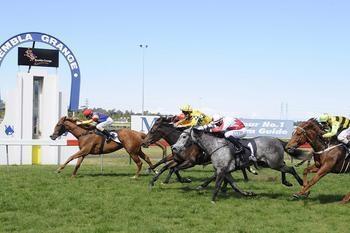 A perfectly judged ride from apprentice Sam Clipperton has enabled talented mare Daisy Can Too to break her maiden with a gritty win at Kembla Grange.

Randwick trainer Ron Quinton has mixed Daisy Can Too’s distances, searching for her right trip, in the early stages of the four-year-old’s career before her victory at 1300 metres.

Daisy Can Too resumed over the 1300-metre trip after a 26-week break. The chestnut’s freshness enabled Clipperton to the front from barrier four soon after the start.

Clipperton set a fast enough speed to be left alone in front while saving Daisy Can Too’s energy for her finishing burst, which he called for at the 300 metres.

Daisy Can Too pinched a two-length break inside the 200 metres, which proved to be just enough as the backmakers whittled the daughter of Mossman’s margin back to a long neck.

The mare posted her maiden success at her seventh start while her record also includes minor placings at Hawkesbury and Newcastle.

Daisy Can Too is a half-sister to the Stakes-placed gelding Kerchings . The mare also hails from the same family as Group 1 winner Bawalaksana as well as the Group 3 winner Damaschino.