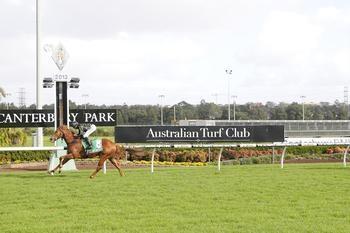 Dubawi gelding Boss Lane put aside a disappointing start to his career when showing his real talent with his impressive win in the TAB Iphone App Handicap (1250m) at Canterbury.

Boss Lane won three trials at Randwick in February and May but trainer Ron Quinton said the track played a big part in his defeat when favourite on debut at Gosford on June 6.

"We went to Gosford expecting something like today," Quinton said. "On that day every winner was on fence except one. I'm not one for track biases but you can't ignore that.

"He worked well the other Saturday with the mighty Liechtenstein so we were confident he'd run well."

The two-year-old hit top form at his city debut when leading throughout before drawing away to post a dominant five-length win as a $4.20 chance.

The chestnut travelled comfortably for jockey Greg Buckley before sprinting brilliantly despite the heavy conditions.

"I had a nice, soft run in front so there was a bit there when I went for him," Buckley said.

Quinton’s great friend, the late David Lamond paid just $60,000 for Boss Lane at the 2012 Inglis Classic Yearling Sale, prompting the Randwick trainer to pay tribute to his mate for selecting the horse.

“I must pay a compliment to David Lamond, who picked this horse out and he was a very cheap horse at $60,000 so hat’s off to Dave,” Quinton said.

“I think over the last 12 or 18 months, he has picked the best horses he has picked in seven or eight years. The proof is in the pudding on the track.”

Boss Lane’s dam Lyricalworks is a half-sister to the Group 1 winner Ruffles as well as the Group 2 winner Ateates while his grand-dam Paris Miss won at Group 3 level.