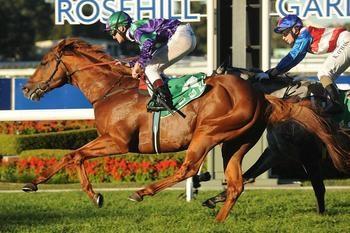 Yarraman Park’s Magic Albert cracked his century of winners for the season over the weekend, achieving the milestone with a horse most assumed we had seen the last of on the track.

Returned to racing after covering just seven mares at Wattle Grove Thoroughbreds last spring, Group II winning sprinter Master Harry has taken a while to hit top gear, but did so at Rosehill  on Saturday.

The five year-old son of Magic Albert was trained previously by Peter Moody, but is now in the care of Ron Quinton, who has coaxed the stallion back to his best.

Having his fourth run back after more than a year in retirement at stud, Master Harry raced up on the pace throughout and took the Benchmark 95 sprint over 1100 metres by half a length.

A $100,000 Inglis Classic purchase from Kanangra, Master Harry still runs for his original owners and has won nearly $330,000 in prizemoney from his four wins from 15 starts.

Master Harry is the best of four winners from Sri Lanka, who comes from the fast family of speedy stakes-winners such as Hot as Hell and Flaming Hot.

Sri Lanka is due to foal again to Magic Albert this spring.

It’s the third year in a row Magic Albert has sired 100 plus winners and his progeny earnings for this season have just topped $3million.

Completely free of Northern Dancer, Mr Prospector and Star Kingdom blood, Magic Albert is an outcross sire that works and is great value at a fee of $19,250.