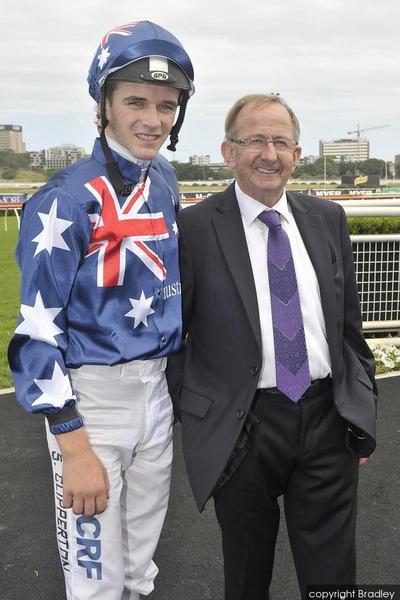 A peach of a ride from Sam Clipperton has paved the way for free pies at Randwick on Saturday when Monton took out the January Handicap sporting the Australian flag silks.

Vili’s Pies sponsored the raceday promising free pies to on-course patrons should the horse wearing the Australian flag colours salute in any race.

"I better go and get myself one,” winning trainer Ron Quinton said.

"He’s a seven-year-old now and has been such a good horse to me. But what won that race was Sammy’s ride.

"He used his initiative to go and sit outside the lead instead of looking for cover. I think the first two horses pinched that race before the home turn.”

Honourable Aussie led with Monton on his outside and the pair quickened into the bend after moderate sectionals early.

The backmarkers were still three to four lengths off at the 250 metre mark and out of contention with the frontrunners still full of energy.

"He’s really appreciated the step back in grade at his past two starts,” Clipperton said.

"Ron’s done a great job with him to keep him consistently performing each season.”

Monton ($5) defeated the John Thompson-trained Honourable Aussie ($21) by1-1/2 lengths with a half-neck to the Gai Waterhouse-trained Kinnersley in third.