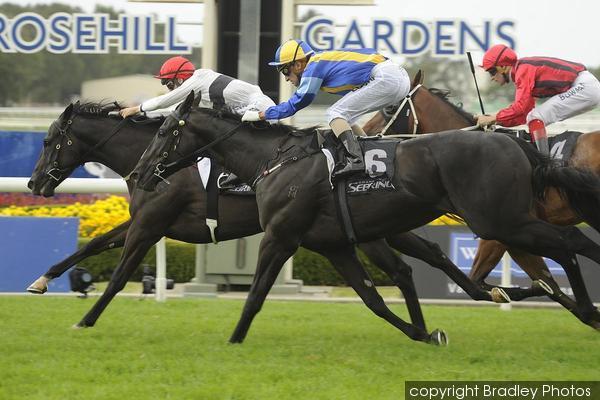 Young jockey Sam Clipperton avoided the early carnage to give the Ron Quinton-trained Peeping a charmed run in winning the Listed The Sebring (1200m) at Rosehill on Golden Slipper day.

Race favourite Washington Heights ($3.20 fav) was hampered in the early stages by wayward galloper Music Magnate. The chain reaction which followed saw Snake Charmer and Kumaon knocked virtually out of the race.

But up front it was Princefamous leading Mr Bogart, with Clipperton stalking the leaders in third position. Despite causing plenty of trouble, Music Magnate loomed strongly four wide into the straight but couldn’t get past a stubborn Peeping. Mr Bogart held on for third.

Trainer Ron Quinton is used to the being in the winner’s circle on Golden Slipper day. The former jockey won four Golden Slippers in the saddle.

"The first time I saw her I said this is a racehorse,” Quinton said. "The speed was drawn inside us and Sam gave her a great ride.

"She’ll go to the PJ Bell in a couple of weeks.

"She’s only lightly framed but she’s got plenty of guts.”

Clipperton couldn’t have ridden Peeping any better. He had her in the right spot and got the best out of the Redoute’s Choice three-year-old filly in a driving finish.

"I gave her a squeeze to get there, then she settled,” Clipperton said. "She doesn’t really quicken off the mark but winds-up and the best part about it was that she was doing her best on the line.”

Here are the jockey's comments on their respective mounts from The Sebring (1200m).