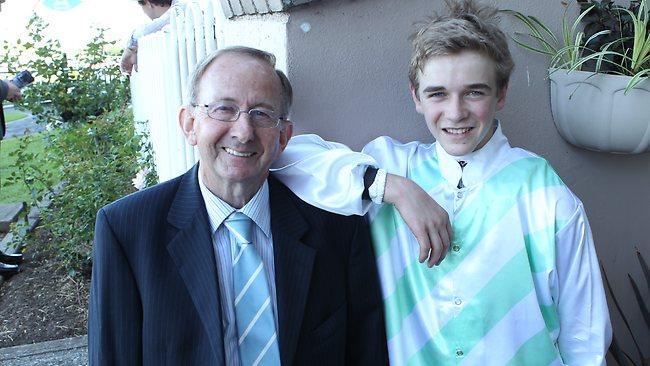 RON Quinton was just a baby-faced teenage apprentice hanging on every word as his master Theo Green lectured him about racing and life.

Among all the pearls of wisdom Green used to offer all those years ago is one simple piece of advice that Quinton has never forgotten.

"Theo used to say 'don't wait for compliments in this game'," Quinton recalled. "He might say 'well done' when we won but that was about it, he never let us get ahead of ourselves.

"I never rode a good race when I won, he would move on to the one I got beaten on."It has been more than 40 years since Green made those utterances to Quinton.

Green, regarded as the greatest tutor of apprentices of them all, has since passed away while Quinton is now a trainer – but both men have earned legendary status in Australian racing and are Hall of Fame inductees.

Quinton still practises the lessons he learned from Green and imparts them to racing's next group of rising apprentice riders, including the trainer's 18-year-old young gun Sam Clipperton.

While the trainer may not be lavish in his praise of Clipperton, he's isn't as reluctant to talk positively about the apprentice rider's development as perhaps Green was all those years ago.

"I believe in what Theo said about not letting an apprentice get ahead of himself," Quinton said.

"Sam lived in my home for three-and-a-half years and (wife) Margaret and I have always told him he won't be getting a lot of compliments and to just get on with his riding."

Quinton has told Clipperton to adopt the philosophy "no news is good news".

"People are quick to criticise in racing," Quinton said.

"So I try to impress upon apprentices like Sam that they don't get too far without putting their nose to grindstone and work hard. You have to earn the respect of people in the game."

But it is also a measure of Quinton's faith in Clipperton's emerging ability that he has entrusted the apprentice with the ride on Monton in his bid to become the first multiple winner of the Group 2 $175,000 Villiers Stakes (1600m) at Warwick Farm tomorrow.

Quinton had the option of using a senior rider on Monton in the Villiers as the race, a Sydney summer racing highlight, usually attracts a full field, is always very competitive and is a thorough examination for any rider.

This is what Quinton did 12 months ago when he replaced Clipperton with Hugh Bowman in the Villiers after the apprentice had won the Festival Stakes on Monton. Clipperton also rode Monton when narrowly beaten by Malavio in the Festival Stakes earlier this month but the apprentice won kudos for his tactical nous that day. It is no surprise the teenager keeps the Villiers mount.

"Sam has taken the next step as a rider, he's a good young man and is riding very well," said Quinton, one of the all-time great jockeys and eight-time premier Sydney rider."One of his best attributes is his balance, he's a good listener and he is starting to think like a jockey now."For an apprentice rider, the experience of competing against the best jockeys at the elite level is invaluable. Sometimes, it is all about being given the chance, as Quinton recalls from his days as an apprentice.

"I remember winning a Chelmsford Stakes as an apprentice on Roman Consul for Tommy Smith in 1967, it was a big moment for me," he said.

"Roman Consul was having only his fourth start in a race and he beat a champion weight-for-age horse called Winfreux.

"Later that spring, I got to ride Roman Consul in the Caulfield Cup because he had such a light weight.

"I had never ridden at Caulfield before and I remember getting a two-month suspension for knocking them down coming to the winning post the first time.

"Theo said after that race he wouldn't let me go to Melbourne to ride again for at least two years because he reckoned I wasn't experienced enough to ride down there. It can be a steep learning curve for an apprentice at times but you learn a lot when you do get the opportunity to ride in the big races."

Quinton is hoping Monton can "do a Roman Consul" for Clipperton tomorrow.

The star apprentice has only ridden in one Group 2 race previously and ironically that was the Villiers last year when he rode Tindal to finish 11th behind Monton.Quinton believes Monton has regained the form which won him the Villiers when the race was also run at Warwick Farm.

Monton is one of those gallopers that seems to reserve his best form for certain times of the year, according to the trainer.

"He races best over the summer months," Quinton said.

"When you go back through his history, it seems some of his best performances are in these months.

"Leading into the Epsom Handicap during the spring, there was nothing wrong with him but his coat wasn't quite 100 per cent right. He still ran a very good race to finish sixth.

"But his coat is great now and I was really happy with his run last start. He is going into the Villiers at his peak so if he can just have even luck in the race he will be hard to beat."

Perhaps the most famous example of a "seasonal" galloper was the magnificent front-runner Vo Rogue.

Although he was able to win good races, including a George Main Stakes and Turnbull Stakes during the spring, he wasn't the dominant force at that time of the year like he was during autumn.

Quinton said many fillies and mares tend to race better in spring than at any other time of the year.

"Fiancee was like that," he said of the former brilliant filly trained by Neville Begg, who won the 1980 Flight Stakes. "She saved her best for the spring."

Quinton is aiming for his fifth Villiers win tomorrow having ridden the big-race winner three times on Dear John (1978), Zing Along (1981) and Northern Reward (1983).

"Dear John was a good horse, he won the Villiers then backed up on the Monday and won the Summer Cup," he said.

"He was trained by Theo (Green) and I always got a lot of pleasure out of winning anything for him. Zing Along was an outsider (33/1) trained by Harold Wilson and Northern Reward was a good Randwick miler. He made Kingston Town stretch a bit in a George Main Stakes one year."

Most retired jockeys who become trainers yearn for the days when they were in the saddle. Quinton is an exception.

"I prefer the training, I really enjoy being with the horse, working with them," he said.

"There are certain parts of it that I don't fancy too much like the politics in the industry and I'm not a great salesman, but when you look at the two, riding was a hobby compared to training.

"I loved riding to the day I finished, I couldn't get there

quick enough to ride, but training does give you that extra satisfaction because you work so closely with the horse."

Quinton's training career has enjoyed a resurgence in the past two seasons with the Group 1 Coolmore Classic win from Ofcourseican, and feature race successes from the likes of Crafty Irna and Monton.

His stable runners earned more than $1 million prizemoney last season, the first time Quinton has trained the winners of so much stakes money for 10 years.

It was a remarkable feat considering Quinton never has more than 12 horses in work at his Randwick stables – a far cry to a decade ago when he had up to 60 gallopers in full training.

"I went from a big team of horses to basically nothing there for a few years," he said.

"Mrs (Millie) Fox was one of my biggest owners and when she passed away a few years ago, I had 30 horses the stable owned by her.

"Then I lost a few to Melbourne and had a lot of trouble rebuilding the team. Around the same time, there was a bit of publicity about me working with the apprentices for Racing NSW.

"I think that sort of gave people the impression I wasn't training which didn't help either.

"But over the last two years, I've never had any more than 10-12 in work but I've struck a little purple patch with horses like Crafty Irna, Ofcourseican and Monton."