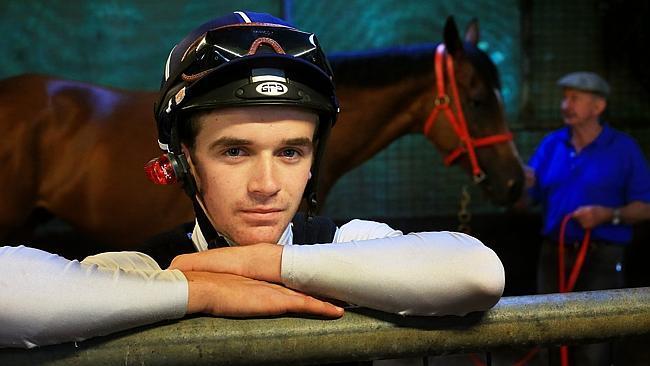 YOU never know when opportunity knocks or, in this case, calls.

Sam Clipperton was only 15, he had already left school and was considering his future.

With his small build, he weighed just 35kg, a career as a jockey seemed logical and appealing. He had completed a Racing NSW industry training course a few months earlier and was looking for a start somewhere.

Clipperton thought his only chance was to leave his family home and take up an apprenticeship in the bush.

This is when Hall of Famer Ron Quinton made the call that would change Clipperton’s life.

“I remembered this kid from the course, I had identified him pretty quickly as potentially a good young rider,’’ Quinton said.

“But I had very few horses at the time and no room for an apprentice.’’

Then when Quinton’s track rider left for an overseas holiday, the trainer thought of the tiny kid who had made such a big impression on him.

“I was sitting at home, doing nothing when Ron rang and asked what my plans were,’’ Clipperton recalled.

“I told him everything was still up in the air a bit, I didn’t really know what I was going to do, and Ron said well you might as well come down to the stables and ride some work.

Quinton arranged for Clipperton to spend two weeks with him at Randwick trackwork — that was five years ago.

Clipperton, now 20, is making the most of his unexpected opportunity.

In less than four full seasons of riding, he has ridden 168 career winners and his mounts have earned more than $5 million prizemoney,

“What I noticed right from the start is that Sam is beautifully balanced in the saddle,’’ Quinton said. “And he keeps improving as a rider.’’

Quinton has consistently backed the youthful Clipperton right from the start of his riding career.

“Ron has never been afraid to throw me in the deep end, give me a go,’’ Clipperton said.

“Other trainers might have replaced me with a senior jockey and that is why I’m so lucky and privileged to have a boss like Ron.

“He gives me opportunities, has confidence in me, and I feel that shows in my riding.’’

There’s that word again — opportunity — and Quinton has provided his apprentice with a potentially career-defining moment at Warwick Farm tomorrow.

The trainer has Clipperton riding in just his second Group 1 race, the $500,000 Chipping Norton Stakes (1600m) on stable star Monton.

Clipperton’s only other ride in a major was on the Quinton-trained Irish Dream in the Coolmore Classic 12 months ago. The mare started at $101 and finished second last.

However, this time Clipperton is on a live chance with the in-form Monton, winner of three of his last four starts, rated at $15 in early betting for Sydney’s first Group 1 race of the year.

It’s rare for apprentice jockeys to be given rides in Group 1 races, particularly weight-for-age events. Usually connections will opt for a more experienced jockey as apprentices can’t utilise their claim.

But Clipperton and Monton go together like strawberries and cream.

The apprentice seems to bring out the best in Monton — and vice versa.

“Sam has had a great association with Monton,’’ Quinton said. “Some horses and jockeys just click.’’

Monton had gone more than three years without a win before a summer form surge of three wins in four starts, earning him a start in the Chipping Norton Stakes.

The apprentice is approaching tomorrow’s big race with a quiet confidence that Monton can bring about an upset result.

“You wouldn’t find a fitter, healthier and happier horse at the moment,’’ he said.

“Monton is thriving off his racing, he’s loving it and all he wants to do is win,

“He goes into the Chipping Norton in great form. Apart from It’s A Dundeel and Boban, he is right up to the level of the others in the race.

“Last year, he ran second in the Chipping Norton, beaten a nose by Shoot Out, and he was only going ‘ordinary’ at the time.

“He is in much better form this year and there is no reason why he can’t run a huge race.’’

Clipperton finishes his apprenticeship in June and realises only too well what a Group 1 win on his resume would mean to his riding career.

“I’m not getting ahead of myself but if I happened to win on Monton then it will prove to everyone I can ride at the top stage,’’ he said.

“It would be a dream come true, the ultimate thing to happen near the end of my apprenticeship.’’

Clipperton is also hoping a good result on Monton will increase his chances of picking up some lightweight rides in races like the Doncaster Mile and Sydney Cup.

In the five years since he first answered the call from Quinton, Clipperton has “stacked on the weight” and now tips the scales at around 52kg,

He has already begun dieting to bring his weight down to ensure he can ride at 50kg if required for both Group 1 handicaps at Royal Randwick during The Championships next month.

“I don’t know what the outcome will be but by getting down to that weight, I’m giving myself a chance to see what eventuates,’’ he added.

Clipperton currently claims 1.5kg and is due to complete his apprenticeship at the end of July.

He has two ambitions before coming out of his time — to ride at least the 13 city winners he needs to out-ride his claim and retain the Sydney apprentices premiership.

“They are realistic goals,’’ he said.

“I can kill two birds with one stone — if I out-ride my claim I’ll probably seal the premiership as well.”

If Clipperton can go back-to-back, he will become only the second apprentice in more than 30 years successfully defend the title.

Since the great Wayne Harris won his third straight titles in 1981 only Bobby El-Issa in 1997 and 1998 has won successive Sydney premierships.

“It would be great if Sam could win the premiership again,’’ Quinton said.

“He is riding very well with limited opportunities. If you look at the top 15 jockeys in Sydney, gee it is strong.

“But Sam’s given himself every chance to hang on and win again and that is not an easy thing to do.’’

The transition from apprentice to senior rider is not easy but it can be the makings of a young rider.

The Berry twins, Nathan and Tommy, are only a couple of years older than Clipperton but they have done so well since coming out of their time that both are being courted on the international stage.

“What Nathan and Tommy have achieved is inspiring to me,’’ Clipperton said.

“But Ron has always taught me to be patient, he says your time will come.

“Just look at Peter Robl. He is in the latter half of his career but only sort of cracked it in the last 10 years.

“Everyone has a different path. Ron says my time will come, don’t give up, keeping working hard and be patient.’’

With so many good jockeys in Sydney racing, Clipperton says he is learning all the time.

“Blake Shinn’s a huge help with my style and my riding, he’s also a great friend,’’ Clipperton said.

“I think Kerrin McEvoy is a great rider and Hugh Bowman is a jockey I look up to as well. He took a similar path to me as he was apprenticed to Ron.

“If I could be half as good as Hugh I will be happy.

“But a good horse makes a good jockey, it’s all about opportunities.’’

With Monton, Clipperton has found his good horse — and the opportunity.