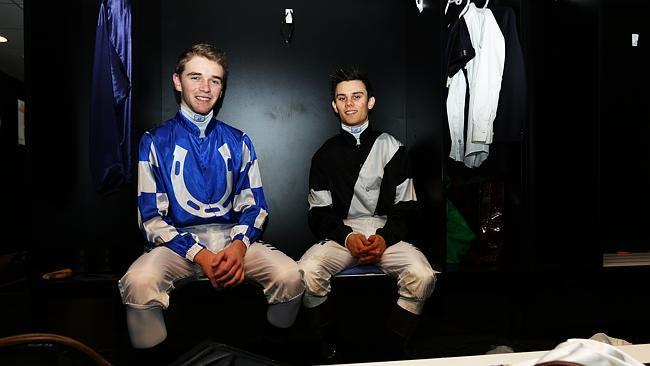 STORY TAKEN FROM THE DAILY TELEGRAPH, PUBLISHED ON THE 12th of June 2014 – http://www.dailytelegraph.com.au/sport/superracing/taylor-marshall-and-sam-clipperton-have-racing-world-at-their-feet-as-ron-quinton-carves-out-impressive-careers/story-fni2gg7e-1226952338789

THE “clashes’’ on their favourite Mario Kart video game are as fierce as they come — and bragging rights are still up for grabs.

“No, I’ve got you covered,’’ was Taylor Marshall’s reply.

This hobby is a reminder that both young men are barely out of their teens but they have the racing world at their feet.

Sydney’s star apprentice jockeys rent a unit together near Randwick racecourse but they come from very different backgrounds — one was born to ride, the other should have been riding surfboards.

Taylor Marshall is the son of a Melbourne Cup-winning jockey, while Sam Clipperton grew up on Sydney’s northern beaches.

But it was Clipperton who followed his heart and became an apprentice jockey three years before the thought ever crossed Marshall’s mind.

Fast forward to the present and Clipperton, 20, is a year younger than Marshall but will complete his apprenticeship next month. Marshall still has two years to go.

In truth, both found their calling by accident as neither had much interest or knowledge of horse racing.

“Unlike Taylor who has the good ‘bloodlines’, my family has no racing background at all,’’ Clipperton said.

“I did grow up riding horses competitively in show jumping and eventing, and I did a little bit of rodeo, too.

“I didn’t play soccer or footy, the horses were my sport, and growing up around horses all I wanted to do was ride fast but I knew nothing about racing.

“My riding instructor was also riding trackwork at Randwick and she took me to the track a few times to have a look around and I really enjoyed it.

“Because I was very small, I started to think about a career as a jockey and as soon as I left school at 15, I started work at the stables.’’

Marshall’s father, John, was a champion jockey and Sydney’s premier rider in 1987-88. He was the regular rider of many champion racehorses including Beau Zam, Sky Chase and Campaign King, also rode successfully in Hong Kong for many years, then returned to famously win the 1999 Melbourne Cup on Rogan Josh for the legendary Bart Cummings.

But through his early teens, Taylor Marshall was blissfully unaware of his father’s outstanding riding career.

“I wasn’t that interested in racing, I was more into soccer,’’ he revealed.

Marshall was a talented soccer player and made the Brisbane Roar Youth squad before completing Year 12. It was then he reached a career-defining decision.

“I was 18 at the time and looking at doing Business Marketing at university but it was really just for the sake of it because I didn’t have my mind set on it,’’ Marshall said.

“That is when I sat down with my family, weighed up my options and riding was thrown on the table.

“I had never even ridden a horse, had nothing to do with them, but I jumped on a few ponies and ex-racehorses on the farm back home and loved it from day one.’’

Once their career choices were made, it led Clipperton and Marshall to take up apprenticeships with Hall of Famer Ron Quinton.

The two young men then decided to rent a unit together and the pair have become firm friends.

“We have learnt to deal with each other,’’ laughed Clipperton.

“But it works well for us because we have to get up at the same time to get to trackwork each morning.

“There has never been a time when we have both slept it. We know the consequences with Ron if we sleep in.

“Taylor and I make sure we are up and off to work before the boss gets to the stables.’’

Both apprentices talk in almost reverential tones about Quinton, a former eight-time Sydney premier jockey, now a leading trainer and one of the most respected men in the racing industry.

“But there is no better boss to keep you grounded and level-headed. He is the man to be with in regards to keeping a strong work ethic.’’

Clipperton said Quinton is “like a fatherly figure’’ to them.

“Ron points us in the right direction,’’ Clipperton said. “He lets you know if there is something not quite right.

“He has been a huge influence in my life.’’

Clipperton and Marshall are mild-mannered, polite and dedicated — the perfect role models for racing’s youth.

But on the racetrack, their friendship is forgotten and each treats the other as just another rival.

They are driven to succeed and both have a fierce competitive streak that is innate in all leading sportsmen and women.

We got a glimpse of their competitive nature when the good-natured bantering between the pair started as The Daily Telegraph visited them this week.

Clipperton said he was the neater of the two, Marshall claimed the opposite.

With the World Cup Soccer starting this week, Marshall said Clipperton had better get used to it.

“The World Cup will be taking over in our place over the next month — I won’t be getting much sleep,’’ Marshall added.

Clipperton did concede Marshall was the “better cook’’ but the latter replied: “To be honest, there is not much cooking going on at our place.’’

The advantage of living together is they are never late for early morning trackwork at Quinton’s Randwick stables.

Clipperton took the opportunity to have another “dig’’ at Marshall: “I make Taylor drive to trackwork each morning — because I can.’’

The talented apprentices are both enjoying excellent seasons — Clipperton is set to defend his Sydney apprentices premiership title and Marshall making an immediate impression in his first season riding in the metropolitan area.

Clipperton has 18 wins for the season and has a five-win buffer over nearest rival Damien Thornton in the apprentices premiership, while Marshall has ridden nine city winners, all coming this year.

With Clipperton due to come out of his time on July 16, he has set himself two significant goals: retain the premiership title and outride his claim.

Clipperton can move closer to securing both ambitions at Rosehill Gardens tomorrow where he has six good rides including Taxmeifyoucan (race 5) and Inside Job (race 7).

“I’ve only got about a month to go before I finish my apprenticeship and everyone says the toughest time of a jockey’s career is when they first come out of their time,’’ Clipperton said.

“Whether it takes a month to crack it or three of four years, everyone has a different path but I’m really looking forward to the challenge.’’

Clipperton has proven himself against senior jockeys with five stakes wins during his apprenticeship, most recently the Scone Cup on Cameo.

The young apprentice believes the faith Quinton has repeatedly shown in his riding ability has given his career real impetus.

“Ron has never been afraid to throw me in the deep end,’’ Clipperton said.

“I won my first Listed race on Monton for Ron in 2011 and I had only been riding for 18 months.

“I’ve also won stakes races on Crafty Irna, Boss Lane and Intimate Moment for Ron and I think those results have helped get me opportunities with other trainers and maybe was the reason I got the ride on Cameo for Darley in the Scone Cup.’’

Marshall returns to Rosehill tomorrow — the same track where five weeks ago he announced his arrival in Sydney racing with a four-win haul including his breakthrough stakes success on Zephyron in the Listed Lord Mayors Cup.

Oxford Poet was one of his four winners that day and the Kim Waugh-trained three-year-old is among Marshall’s six rides at Rosehill tomorrow.

Marshall’s brilliant form and his 3kg claim is providing him with plenty of opportunities this winter and prompting some speculation he may make a late-season charge and wrest the apprentices title from his flatmate.

But Marshall dismissed the premiership talk and said his focus is simply on improving his riding.

Being the son of a champion jockey brings with it some pros and cons but Marshall prefers to look at it positively.

“Is there pressure? Yes and no,’’ Marshall said.

“I don’t like to look into it too thoroughly but I know I’ve got the benefit of my Dad’s advice. He comes with me to most race meetings and that is a big help.’’

Marshall believes starting his riding career at a later age than most apprentices has been advantageous.

“Ron and I were speaking about this the other day,’’ he continued. “We both think it is a positive thing to have finished school and have that education behind you.

Marshall has no regrets about his chosen career path — despite having to shelve his promising soccer career.

“I don’t have much time to get out and have a kick these days,’’ he continued.

“But every day I get the thrill of being on top of an animal the size of a racehorse and having that connection is intriguing.

“Racing can be a gruelling sport, it takes a toll on your body, but you need to have a passion and love for the horse.

“There are a lot of highs and lows in racing but this is a great sport to be involved with.’’