Dixie Blossoms and Daysee Doom – Head and Head All the Way. 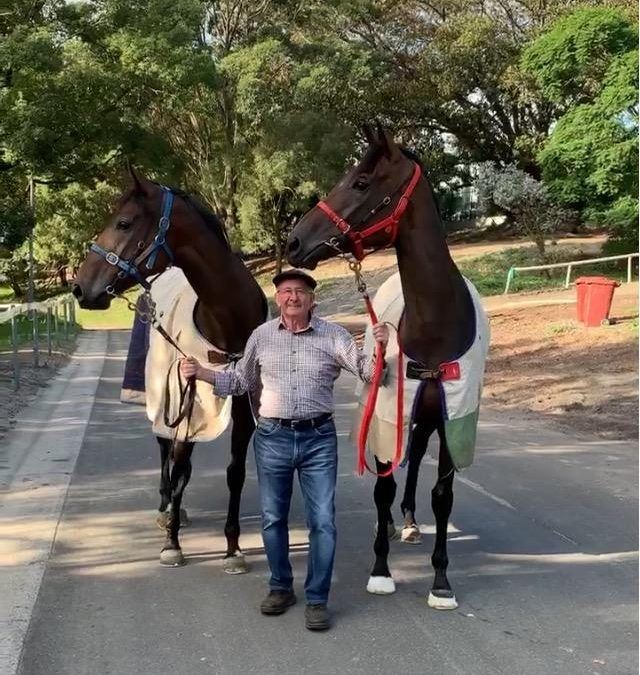 This is not a joke, but it is a bizarre tale that, now it’s reached its conclusion, Ron Quinton can marvel at just how lucky he’s been.

They’re known as Dixie and Daysee. They’re not related but to Quinton and his team they might as well be twins because their lives intertwined for the almost four years they spent at Randwick.

Dixie Blossoms and Daysee Doom bowed out in the same race, the Coolmore Legacy, during The Championships and had it not been for a setback during Daysee’s first preparation they might have debuted around the same time too.

“Between them they almost earned $3 million which for a small stable is pretty good,’’ Quinton said.

“Up to their last run their prizemoney was almost identical, Dixie got away by running second in the Legacy.’’

On the final scoreboard Dixie Blossoms won just over $1.5m from 32 starts, including seven wins, while Daysee Doom collected over $1.2m from her 27 starts which yielded nine wins.

During Quinton’s riding career he was synonymous with the champion mare Emancipation – while Dixie and Daysee aren’t quite at her level it’s fitting they will forever be a highlight of his training career.

Dixie Blossoms’ path into the Quinton stable could be described as standard through owner Alan Osburg but the same can’t be said for Daysee Doom.

Her owner Jack Griffin, based in Perth, took Quinton by surprise when he called offering him a Domesday filly because Griffin felt a sense of debt to the trainer.

“He rang me out of the blue one day and said ‘I think I owe you a favour’,’’ Quinton said.

He said I’ve bred this filly and would you take her to train.

“She was in Melbourne at the time and ready to go into pre-training so I said to get her on a float up the Hume and send her Goulburn to Emma Longmire to pre-train.’’

Daysee Doom started her career three months after Dixie Blossoms but they didn’t cross paths on the track until the 2017 Group 1 Coolmore Classic (1500m), the first of 11 clashes.

The score wound up 7-4 to Dixie, they ran one-two on three occasions and their Group 1 wins came in the same race 12 months apart – Daysee won the 2018 Coolmore Classic and Dixie the 2019 edition.

Both fillies started their careers with a win and signed off in front of the more than 43,000 people who packed Randwick to see off Winx.

That day Daysee Doom didn’t produce her best but Dixie Blossoms was narrowly denied her own fairytale farewell in the Group 1 Coolmore Legacy (1600m).

“Dixie was always a very nice filly but she needed to mature a bit,’’ Quinton said.

“Daysee started a little bit later because she went sore behind a couple of times. They progressed through the fillies and mares races into Group races.

“They were marvellous for the stable. They were real gifts that came along gradually and kept improving.

“It’s quite amazing when they came into the stable they came in two days apart and they went out on the same float when they retired.’’

The careers of racehorses aren’t just about their statistics and race records, they can change lives.

In Quinton’s case the likes of Dixie and Daysee were there at one of the toughest times of his life, when his beloved wife Margaret died in 2017.

And they’ve afforded him the chance to sit back and proudly watch yet another apprentice protégé in Andrew Adkins realise his Group 1 dream on Daysee Doom in the 2018 Coolmore.

“We had a rough trot there, losing Margaret, it was a rocky road for a while,’’ he said.

“I’m sure their performances helped me and the stable a lot.

“Daysee was so good for Andrew Adkins. He won a Group 1 on her as a kid and we were always happy to have him on.

“He had a good affiliation with her. I couldn’t say there was a day when he didn’t ride her well.’’

The future for Dixie Blossoms is a visit to stallion Exceed And Excel, who her owner raced with Nick Moraitis, while Daysee Doom will head to freshman stallion Kementari.

Now they are retired, the big question Quinton had to answer is – which one was the better horse?

There’s a touch of diplomacy in his answer, but it’s an opinion and what can’t be split is the impact they’ve had on everyone involved with them.

“I was always under the impression that Dixie was the better horse but for a long time there Daysee was better,’’ Quinton said.

“It was only really in the last prep Dixie rose to the occasion.

“They were my Winxs. They will be hard to replace but I have some promising fillies, nicely bred, that could step up to the mark.’’